The Miracle of
​My Cat(s) 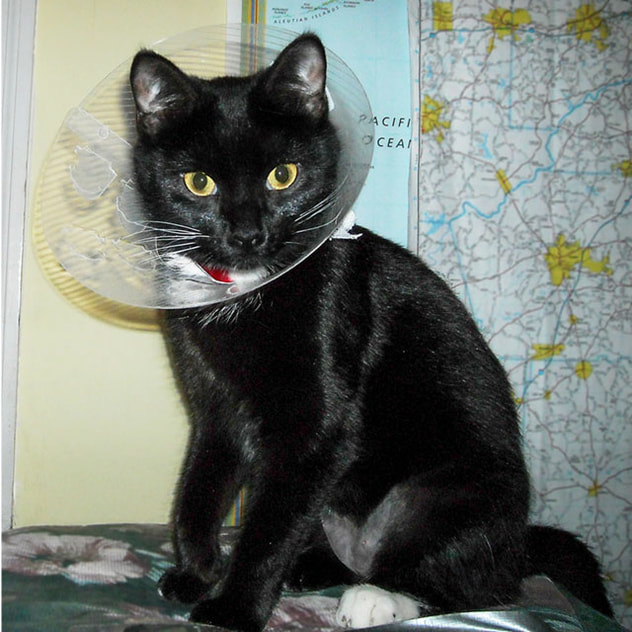 In February 2012, our darling Tuxie was roughly about 9 months old, and seemed to be acting strangely...  I asked my husband, who'd had several cats in his life, if he thought she might be going into "heat" (estrus).  He considered it, and said yes, he thought that very likely was  why she was acting so peculiar.

At that time, Tuxie had been only an outdoor/garage cat, but luckily we caught it in time to sequester her in the garage before she got pregnant. We then endured about a month of yowling, howling, and assorted other sounds of her distress.  Fortunately again, I read a book called "The Cat Whisperer," and was able to discover that even if a cat appears to be going out of "heat," she can go right back into it, right away... So just as soon as she seemed to be calming down, we got her to Planned Pethood, got her spayed, and got all her immunizations done.

She was a miserable kitty for another 3-4 weeks, but I can't say enough good things about Planned Pethood -- they ROCK!  Completely non-profit, offering spay & neuter services and all vaccines at cost, solely to prevent more animals from being euthanized in animal control shelters.

Annabel was adopted from our local animal shelter, in May 2017, when she was just 3 months old -- she was a Valentine Kitty, born on Valentine's Day.  She's the most aggressive of our cats, the least afraid of things in general.  She really wants to play with Tuxie, but Tuxie ain't having it; just having them in the same room usually results in a hissing bitch-slapping contest.  So, we mostly keep them separated.  She loves to eat paper, and will chew on pretty much anything she can get in her mouth, and she's also one of those cats who loves to knock things off tables, just on general principles.  She's destroyed so many things of my son's, I'm amazed he still allows her to "live" in his room!  So, she's absolutely well-named; if ever there was a cat possessed of a demon, its Annabel!

Tommy is another rescue, who showed up at our house very obviously starving, just skin and bones.  We called him "Tommy" because a more obvious TOM cat probably could not be found -- though he has now been fixed, when we took him for his immunizations.  We also found out that he suffers the Feline Immunodeficiency Virus... so he may have a shorter than normal life, but we will make sure that how ever long he lives, it will be a safe and comfortable life.  He's just a pure love, one of the most affectionate and personable cats I've ever run across, and Planned Pethood agreed -- this cat was not feral, he was obviously abandoned.  Some people need to have their humanity card revoked.  We also sometimes call him "Talkie Tommy," because this cat "mrowls" with a funny, deep-throated "voicebox," just walking around the garage "mrowling" at everything.  He's a big boy, nearly 20 lbs, with a wide, thick skull and very large paws.  I just love his "gray striped trousers" on his forelegs, with those white feet at the bottom. 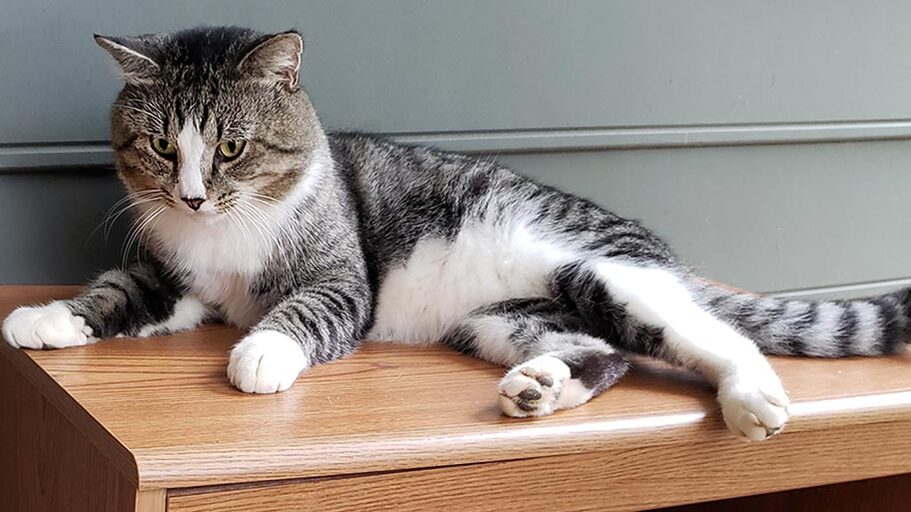 These 2 pics just above -- on the left, he's photobombing like a champ, when I was trying to take pics of my enormous aloe plants, which you can see a bit of at the bottom of the pic. On the right, he's outside our sliding-glass door, begging for attention -- yes, mrowling.
I've never seen a cat who loves to sleep on his back as much as Tommy does!